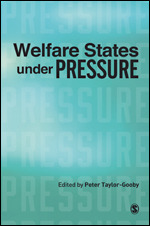 Share
February 2002 | 224 pages | SAGE Publications Ltd
Download flyer
Exerpt from the Financial Times Comment & Analysis: Europe takes on reform of the welfare state: A new study indicates that while the UK has transformed its social policies, the rest of Europe has been far from idle -

`[A] stimulating new book on European welfare states [Welfare States under Pressure] suggests that the view of Britain as the only great welfare state reformer is overstated. And it adds that the game across Europe is about to change….

This new study argues that, particularly in the late 1990s, there has been more reform in the rest of Europe than is appreciated in the UK. And that Europe as a whole is on the cusp of much greater changes….

Certainly in France and possibly in Germany, the study judges, the traditional power balance between government, employers, unions and welfare providers has shifted such that government may be able to impose much more drastic measures... In the UK, by contrast, the impact of EU institutions may in some areas mean a degree of levelling up - as in healthcare.

The most intriguing question is how far reformed welfare states will retain the social cohesion they are designed to produce. So far, even in the UK, they have proved remarkably resilient - adapting to changing needs rather than being "rolled back". This study's verdict on the issue is "don't know". But so much change is on the way, it says, that "the past is unlikely to be a good guide to the future"' - Nicholas Timmins, The Financial Times

Welfare States under Pressure provides a timely and comprehensive review of welfare policy-making in Europe. The text compares the different ways in which welfare states have responded to similar pressures over recent years, and considers how welfare is likely to develop in the future.

· provides up to date accounts of welfare development in Finland, Sweden, France, Germany, Switzerland, Spain and the United Kingdom.

· written accessibly, and tightly edited, with each chapter following the same conceptual structure.

Welfare States under Pressure is invaluable to undergraduate students in social policy, European studies and politics, and will also be of great use to other social science students interested in Europe and its future development.

The Social Construction of Europe

Exploring the Sociology of Europe

Politics and Society in Western Europe

The SAGE Handbook of European Studies

The State or the Market