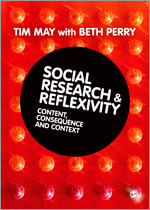 How is reflexive practice shaped by the contexts and cultures in which researchers work?

How might research practice respond to twin demands of excellence and relevance in the knowledge-based economy?

Thinking reflexively about the inter-relationships between social research and societal practices is all the more important in the so-called knowledge economy.

Developing reflexive practices in social research is not achieved through applying a method. Where and how researchers work is fundamental in shaping the capacities and capabilities to produce research as content and context lie in a dynamic interaction.

This book not only provides a history of reflexive thought, but its consequences for the practice of social research and an understanding of the contexts in which it is produced.

It provides critical insights into the implications of reflexivity through a discussion of positioning, belonging and degrees of epistemic permeability in disciplines. It is also highly innovative in its suggestions for ways forward in research practice through the introduction of active intermediaries.

Overall, the book offers an exciting new position on reflexive research that will generate much debate through its successful achievement of two difficult feats: providing essential reading for orientations on reflexivity and social research in the twenty-first century and making a landmark contribution to thinking and practice in the field.

Social Research and Reflexivity is suitable for advanced undergraduates, postgraduates and social researchers in general across a number of disciplines including geography, social research, management and organizations; economics, urban studies, sociology, social policy, anthropology and politics, as well as science and technology studies.

'Tim May and his colleague, Beth Perry, are uniquely placed to move knowledge production and deployment beyond the usual nostrums. Experienced and well-informed academics, they choose to occupy the space "betwixt and between" the academy, public engagement, and critical reflexivity. For them, the complex interplay of institutional structures, policies, theories, methods, and academic framings are to be understood together reflexively in the context of ongoing activity between and within universities, regions, and policy programs.

This challenging analysis builds on years of experience, charting a course between the dysfunctional utopianisms of positivism, relativism, and cynicism to argue for a committed re-engagement with human problems in their complexity. This is accomplished through the mobilization of multiple perspectives, expertise, and the direct engagement in contexts of action capable of affecting the analyses.

Together these views constitute a harsh critique of academic business as usual and of dystopian schemes that masquerade as the latest intellectual trends or policy fad. But May and Perry do not stop at critique as do most. They offer possible ways forward that are demanding but possible to engage for those who really care.

This is a report from the trenches where a few scholar-actors are doing vital work under difficult conditions. My hope is that this book will cause the powers that be in academia and in government to stop and reflect, to engage with these critiques, and to alter the dysfunctional working conditions that rob society and academia of the critical reflexivity needed for meaningful social change -
Davydd J. Greenwood, Goldwin Smith Professor of Anthropology,
Cornell University

'Thought provoking and well organised this is an entirely novel and well thought out discussion of reflexivity. It is much more sophisticated than anything else I have come across. Books which follow in the area will have to pay regard to it, because it is the most comprehensive and nuanced statement yet' - Malcolm Williams, Director of School of Social Sciences, University of Cardiff

The dimensions or concepts used in the book would be to help in reflecting on reflexive practices in a more general sense, a useful tool, especially if you want to improve framework conditions, or space for reflection in specific scientific communities. (Translation).

An Introduction to R for Spatial Analysis and Mapping

An Introduction to Evaluation

This title is also available on SAGE Research Methods, the ultimate digital methods library. If your library doesn’t have access, ask your librarian to start a trial.