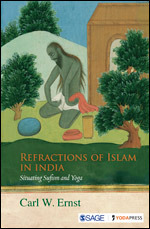 The essays explore Sufism as it developed in the Indian subcontinent, including translations of previously unavailable texts, and revealing unexpected insights into the lives, practices, and teachings  of Indian Muslims over nearly a thousand years. They also trace remarkable moments in the history of Muslim engagement with Indian religious and cultural practices. This includes not only Muslim participation in Indian art and literature, but also the extraordinary role that Sufis have played in the practice of yoga. Employing new approaches to religious studies that avoid essentialism and ideological concepts of religion, and shorn of unnecessary jargon, these compelling essays will be easily accessible to a larger audience.

Preface
Acknowledgments
Sufism and Islam in South Asia
From Hagiography to Martyrology: Conflicting Testimonies to a Sufi Martyr of the Delhi Sultanate
Forgotten Sources on Islam in India
The Interpretation of the Classical Sufi Tradition in India: The Shama'il al-atqiya' of Rukn al-Din Kashani
Persecution and Circumspection in the Shattari Sufi Order
The Daily Life of a Saint, Ahmad Sirhindi (d. 1624), by Badr al-Din Sirhindi
Islam and Sufism in Contemporary South Asia
Reconfiguring South Asian Islam: From the 18th to 19th Century
Sufism, Yoga and Indian Religions
Sufism and Yoga According to Muhammad Ghawth
Admiring the Works of the Ancients: The Ellora Temples as Viewed by Indo-Muslim Authors
The Islamization of Yoga in the Amrtakunda Translations
Muslim Studies of Hinduism? A Reconsideration of Persian and Arabic Translations from Sanskrit
Situating Sufism and Yoga
Two Versions of a Persian Text on Yoga and Cosmology: Attributed to Shaykh Mu`in al-Din Chishti
Fragmentary Versions of the Apocryphal “Hymn of the Pearl” in Arabic, Turkish, Persian, and Urdu
Accounts of Yogis in Arabic and Persian Historical and Travel Texts
Fayzi's Illuminationist Interpretation of Vedanta: The Shariq al-ma‘rifa
Being Careful with the Goddess: Yoginis in Persian and Arabic Texts
The Limits of Universalism in Islamic Thought: The Case of Indian Religions
A 14th-Century Persian Account of Breath Control and Meditation
Traces of Shattari Sufism and Yoga in North Africa
Indian Lovers in Arabic and Persian Guise: Azad Bilgrami’s Depiction of Nayikas
A Persian Philosophical Defense of Vedanta
Bibliography of the Publications of Carl W. Ernst
Index

[This book] highlights the cultural, historical and spiritual legacies of important Sufis in the subcontinent…the author demonstrates how the concept of sainthood in Islamic History is one of the fundamental religious categories that has guided the development and structure of Muslim societies…. Well researched and a must read for those interested in Islam in South Asia.

“Ernst fantastic research work…certainly for erudite but it is also for lay readers…includes fables and works on medicine, astrology, mathematics, and sexology and so on.”