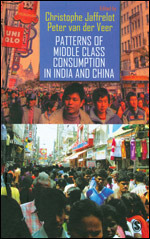 Share
Courses:
Intro to Cultural Anthropology
June 2018 | 300 pages | SAGE India
Download flyer
Patterns of Middle Class Consumption in India and China explores the complex history and sociology of the middle class from a comparative perspective. It has papers written by sociologists, anthropologists and political scientists rather than economists, so the emphasis is on cultural shifts rather than economic statistics.The major contribution of this volume is that these two emerging powers of Asia are not, as is usual, compared to the West, but with each other. Considering that these two societies have so much in common in scale, civilization history and as emerging economies, the book is timely.

The focus of the book is on the social and political implications of the new consumption patterns among the middle classes of India and China in the context of economic growth, liberalization of markets and globalization. Reflecting upon and critically engaging with the traditional sociological notions on which definitions of the middle class have been based, the book analyzes the intermingling of these notions with new attitudes in the wake of the consumer revolution. More specifically, an entire gamut of aspects of the consumer culture have been explored-tourism, leisure activities and the entertainment industry (art, Karaoke and soap operas)—as well as the consumption of experiences through these. It is argued that these phenomena have particular Indian and Chinese incarnations, which need to be analyzed in a manner that does not privilege a limited western experience of globalization.

With its fresh insights and perspectives, the book will appeal to students of anthropology, sociology, political science, media studies and cultural studies. It will also be useful for market research professionals.

Introduction
Why Should We Vote? The Indian Middle Class and the Functioning of the World`s Largest Democracy
Rewriting the Code: Software Professionals and the Reconstitution of Indian Middle Class Identity
The Indian Corporate Hospitals: Touching Middle Class Lives
Chinese Middle Class: Reality or Illusion?
Power of Knowledge: The Imaginary Formation of the Chinese Middle Stratum in an Era of Growth and Stability
A Requiem for Songpan, or Once More about China`s Civilizing Mission
History and Heritage Woven in the New Urban Fabric: The Changing Landscape of Delhi`s `First City`, 1995-2005
Eat, Drink, and Sing, and be Modern and Global: Food, Karaoke and Middle Class Consumers in China
Transnational and Transcultural Circulation and Consumption of East Asian Television Drama
Sex, Television, and the Middle Class in China
Aspirational Weddings: The Bridal Magazine and the Canons of `Decent Marriage`
Yeh Dil Maange More . . .Television and Consumer Choices in a Global City
Consuming Art in Middle Class China
Index

The editor and the authors have done a commendable job for achieving their objective to a large extent. In its reader friendly style of communication and construction of argument the book strongly puts forward the central theme. It is a useful addition of literature on consumerism and consumption pattern especially in the context of the middle class; a section whose purchasing power and decision making process is increasingly guided by globalisation phenomena. It will be useful for academicians and practitioners who could derive learning based on the discussion on real life cases and practical understanding. Learners and researchers of sociology and the social sciences could draw benefits from this book as well.

The Journal of Entrepreneurship

The book provides a mine of information on state and society in the two countries and should be essential reading for all engaged with varied reflections on contemporary urban society.

The book explores the sociology of the middle class in both India and China from a comparative perspective. It analyses the intermingling of the traditional sociological notions with new attitudes in the wake of the consumer revolution.

It puts together a comparative study that focuses specifically on the middle class, a section of society that plays a pivotal role in the social, economic, political and global transformations that both these countries are going through. An important contribution to the analysis of a pivotal class in India and China, this work will also prove to be a useful reference volume in trying to understand what is common to and what differentiates both these countries.

With its fresh insights and perspectives, the book will appeal to the students of anthropology, sociology, political science, media studies and cultural studies. It will also be useful for market research professionals.

A nuanced and insightful look into a category of consumers that determine the future of societies anywhere in the world, it is an invaluable read.

This book must be credited for critiquing the empirical construction of the middle class and locating it in the consciousness of the post-capitalist man through dialogues with signs, symbols and icons.

The volume analyses the specificities of middle class in India and China, seeking to explain the extent to which it follows a similar route in both countries….an interesting read.