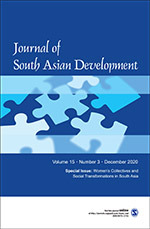 The Journal of South Asian Development, a refereed publication, publishes research articles and scholarly comment relating to all facets of development in South Asia. The journal is multi-disciplinary, innovative and international in its approach and includes theoretical and conceptual articles as well as empirical studies covering both historical and contemporary issues/events. While the journal is primarily a social science journal (covering politics, international relations, sociology, anthropology, economics), we also consider papers from the natural and environmental sciences, geography, history and other disciplines that deal with development issues in order to provide comprehensive and balanced scholarship.

Geographically, the coverage includes the seven states of South Asia (India, Pakistan, Sri Lanka, Bangladesh, Nepal, Bhutan and the Maldives) plus Afghanistan and Myanmar. Articles could focus on one particular state, group of states or the entire region. Articles comparing South Asian states/region with other region/states will also be considered.

Manuscripts are initially screened for quality, content and relevance by a member of the Editorial team. At present about 80 % of the submissions to the journal do not pass this initial hurdle. The manuscripts deemed suitable are then taken forward for double-blindfold peer review. Our aim is to achieve a time from submission to first decision of about three months.

This journal is a member of the Committee on Publication Ethics (COPE).

The Journal of South Asian Development (JSAD) is a peer-reviewed journal that publishes papers based on original research pertaining to any aspect of development in South Asia (a region comprising of Afghanistan, Pakistan, India, Sri Lanka, Bangladesh, Nepal, Bhutan and the Maldives). We invite papers that focus on the economic dimensions, social relations or power dynamics of development in South Asia. We welcome a diversity of theoretical perspectives, analytical frameworks and methodological approaches, and value interdisciplinary and comparative research. JSAD engages a wide readership across the social sciences, both in South Asia and globally, including researchers, practitioners, policymakers, the media and others.

Contributions are welcomed from development studies scholars, economists, economic historians, anthropologists, sociologists, political scientists, geographers, and others committed to the study and analysis of development issues, past and present, in any part of the South Asia region. Within this broad field, we are particularly interested in receiving research articles on:

Journal of South Asian Development is hosted on SAGE Peer Review; a web based online submission and peer review system. Please read the Manuscript Submission guidelines below, and then visit https://peerreview.sagepub.com/jsad to login and submit your article online.

JSAD is a multi-disciplinary journal with limited number of volumes and papers published in a year. One of our major objectives is to provide adequate space to papers from different social sciences and humanities as well as contributors from different parts of South Asia and the world. In view of these objectives and in order to give a chance to as many contributors as possible, we would like to discourage multiple papers from the same author contemporaneously.

Authors will be provided with a copyright form once the contribution is accepted for publication. The submission will be considered as final only after the filled-in and signed copyright form is received. In case there are two or more authors, the corresponding author needs to sign the copyright form.

Papers should be no longer than 10,000 words length and ideally combine theory with empirical analysis. Papers may focus on a particular state, a group of states or the entire South Asian region. Papers that compare South Asian states or the region with other states and regions are also welcome.

All articles must be accompanied by an abstract of 200 words, approximately five keywords, and full institutional affiliation, postal and email addresses and brief profile of the author/s. In case there are two or more authors, then corresponding author’s name and address details must be clearly specified on the first page itself. Papers submitted to JSAD must not be under consideration by any other publisher; authors must attest to this at the time of submission. It is also the author’s responsibility to disclose any potential conflict of interest regarding the submitted manuscript.

The JSAD also publishes reviews of books on all aspects of development in South Asia. Individual authors or publishers interested in having their books reviewed in the JSAD should send books to Lipika Kamra, Queen Mary University of London, UK. Lipika Kamra can be contacted by email at l.kamra@qmul.ac.uk

SAGE is committed to upholding the integrity of the academic record. We encourage authors to refer to the Committee on Publication Ethics’ International Standards for Authors and view the Publication Ethics page on the SAGE Author Gateway

As part of our commitment to ensuring an ethical, transparent and fair peer review process SAGE is a supporting member of ORCID, the Open Researcher and Contributor ID. ORCID provides a unique and persistent digital identifier that distinguishes researchers from every other researcher, even those who share the same name, and, through integration in key research workflows such as manuscript and grant submission, supports automated linkages between researchers and their professional activities, ensuring that their work is recognized.

The collection of ORCID iDs from corresponding authors is now part of the submission process of this journal. If you already have an ORCID iD you will be asked to associate that to your submission during the online submission process. We also strongly encourage all co-authors to link their ORCID ID to their accounts in our online peer review platforms. It takes seconds to do: click the link when prompted, sign into your ORCID account and our systems are automatically updated. Your ORCID iD will become part of your accepted publication’s metadata, making your work attributable to you and only you. Your ORCID iD is published with your article so that fellow researchers reading your work can link to your ORCID profile and from there link to your other publications.

If you do not already have an ORCID iD please follow this link to create one or visit our ORCID homepage to learn more.