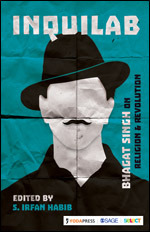 Extolled for his extraordinary courage and sacrifice, Bhagat Singh is one of our most venerated freedom fighters. He is valourised for his martyrdom, and rightly so, but in the ensuing enthusiasm, most of us forget, or consciously ignore, his contributions as an intellectual and a thinker. He not only sacrificed his life, like many others did before and after him, but he also had a vision of independent India.

In the current political climate, when it has become routine to appropriate Bhagat Singh as a nationalist icon, not much is known or spoken about his nationalist vision. Inquilab: Bhagat Singh on Religion and Revolution provides a corrective to such a situation by bringing together some of Bhagat Singh's seminal writings on his pluralist and egalitarian vision. In doing so, it compels the reader to see that while continuing to celebrate the memory of Bhagat Singh as a martyr and a nationalist, we must also learn about his intellectual legacy. This important book also makes a majority of these writings, hitherto only available in Hindi, accessible for the first time to the English-language readership.

Preface
Introduction
On Diverse Social and Political Issues: Some Incisive Comments
Universal Brotherhood, November 1924
Religion and Our Freedom Struggle, May 1928
Communal Riots and Their Solution, June 1928
The Problem of Untouchability, June 1928
Students and Politics, July 1928
Naujawan Bharat Sabha and the Evaluation of National Leadership
Manifesto of Naujawan Bharat Sabha, Punjab, Lahore, April, 1928.
Varied Views of the New Political Leaders, July 1928
Lala Lajpat Rai and the Youth, August 1928
Revolutionary Ideas
Why I Am an Atheist, October 1930
Introduction to the ‘Dreamland’, 15 January 1931
To Young Political Workers
What Is Revolution? Letter to Modern Review, 24 December 1929
The Real Meaning of Violence
Statement in the Sessions Court, 6 June 1929
Statement Filed in the Lahore High Court
Letter to Sukhdev Against Suicide
Some Reflections on the International Revolutionary Movement
What Is Anarchism, Part One, May 1928
What Is Anarchism, Part Two, June 1928
What Is Anarchism, Part Three, August 1928
Russian Nihilist Revolutionaries, August 1928
Insightful Excerpts from His Jail Notebook

“The message…is that an individual who is not in tune with the mainstream ideas of his own society is liable to be punished, and Bhagat Singh was no exception.”