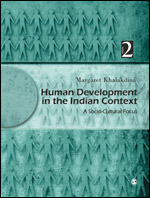 A contextual complement to its prequel, this volume attempts to present the major socio-psychological and cultural influences on the developing Indian subject within the Indian context. This is pivotal as most books on human development are based on Western patterns and examples, which are vastly different from the Indian historical, cultural, and chronological setting.

Development theories relevant to the Indian subject are analyzed through empirical data with an emphasis on yet the unresearched domains of the Indian psyche. Socialization is a basic conceptual frame in this book, as it is the core of the development process related to the individual's chronological age and maturational stages.

The book analyzes development from childhood to adolescence in the Indian context, also focusing on the mother figure that is nurturer and plays an active role in the subject's development.

Its multidisciplinary focus on psychological, sociological, anthropological, and even economic and socio-political dimensions that affect this development severely is explained lucidly through several flow charts, paradigm charts and diagrams. Further areas of interdisciplinary directions towards understanding the holistic development of the Indian subject in the contemporary age are also identified.