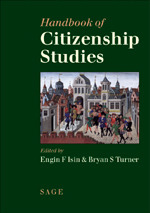 Share
January 2003 | 340 pages | SAGE Publications Ltd
Download flyer
'The contributions of Woodiwiss, Lister and Sassen are outstanding but not unrepresentative of the many merits of this excellent collection'- The British Journal of Sociology

From women's rights, civil rights, and sexual rights for gays and lesbians to disability rights and language rights, we have experienced in the past few decades a major trend in Western nation-states towards new claims for inclusion. This trend has echoed around the world: from the Zapatistas to Chechen and Kurdish nationalists, social and political movements are framing their struggles in the languages of rights and recognition, and hence, of citizenship.

Citizenship has thus become an increasingly important axis in the social sciences. Social scientists have been rethinking the role of political agent or subject. Not only are the rights and obligations of citizens being redefined, but also what it means to be a citizen has become an issue of central concern.

As the process of globalization produces multiple diasporas, we can expect increasingly complex relationships between homeland and host societies that will make the traditional idea of national citizenship problematic. As societies are forced to manage cultural difference and associated tensions and conflict, there will be changes in the processes by which states allocate citizenship and a differentiation of the category of citizen.

This book constitutes the most authoritative and comprehensive guide to the terrain. Drawing on a wealth of interdisciplinary knowledge, and including some of the leading commentators of the day, it is an essential guide to understanding modern citizenship.

Engin F Isin is Associate Professor of Social Science at York University. His recent works include Being Political: Genealogies of Citizenship (Minnesota, 2002) and, with P K Wood, Citizenship and Identity (Sage, 1999). He is the Managing Editor of Citizenship Studies.

Bryan S Turner is Professor of Sociology at the University of Cambridge. He has written widely on the sociology of citizenship in Citizenship and Capitalism (Unwin Hyman, 1986) and Citizenship and Social Theory (Sage, 1993). He is also the author of The Body and Society (Sage, 1996) and Classical Sociology (Sage, 1999), and has been editor of Citizenship Studies since 1997.

`This is a rich and timely collection that highlights the complex and multi-layered nature of contemporary citizenship. Its editors, as well as many of the contributors to this well organized volume, are among the top scholars working on the issue. Political, economic, social and cultural dimensions of citizenship are examined and the relationships of citizenship to collectivities below and above the "nation-state" level are elaborated' - Nira Yuval-Davis, University of Greenwich

`Migration, globalization, European unification and other social changes all challenge conventional wisdom about citizenship. Social science brings crucial perspectives to contemporary debates over civil rights, political belonging, minorities and the public sphere. This volume not only summarizes the recent wave of scholarship but casts it in new light by situating current concerns in historical context and attending to both theoretical debates that cross disciplines' - Craig Calhoun, New York University

`This book provides a very useful entry point into the many and wide-ranging debates about citizenship and about rights. It locates the citizenship discussion very well, thereby helping us to understand why there has been such an explosion of interest in such a long-standing notion of Western political thought' - Jane Jenson, Professor of Political Science, Université de Montréal

'The contributions of Woodiwiss, Lister and Sassen are outstanding but not unrepresentative of the many merits of this excellent collection'- The British Journal of Sociology

Intercultural Citizenship in the Post-Multicultural Era