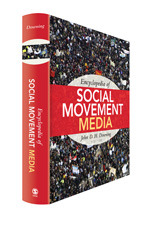 Share
October 2010 | 632 pages | SAGE Publications, Inc
Download flyer
To request a free 30-day online trial to this product, visit www.sagepub.com/freetrial
This one-volume encyclopedia features around 250 essays on the varied experiences of social movement media over the planet in the 20th and 21st centuries. Examining the tip of a gigantic iceberg, this reference resource examines a sample of the dizzying variety of formats and experiences that comprise social movement media. The guiding principles have been to ensure that experiences from the global South are given voice; that women are properly represented among contributors; that the wide spectrum of communication formats is included; that further reading is provided where relevant; and that some examples are provided of repressive social movement media, not exclusively progressive ones.
Thematic essays address selected issues such as human rights media, indigenous peoples' media, and environmentalist media, and on key concepts widely used in the field such as alternative media, citizens' media, and community media. The encyclopedia engages with all communication media: broadcasting, print, cinema, the Internet, popular song, street theatre, graffiti, and dance. The entries are designed to be relatively brief with clear, accessible, and current information. Students, researchers, media activisits, and others interested in this field will find this to be a valuable resource.
Key Themes
Cinema, Television, and Video
Concept and Topic Overviews
Cultural Contestations
Feminist Media
Gay and Lesbian Media
Human Rights Media
Independence Movement Media
Indigenous Peoples' Media
Information Policy Activism
Internet
Labor Media
News
Performance Art Media
Popular Song
Press
Radio
Social Movement Media
Regions

“This is a comprehensive, illuminating, and inspiring work of reference. By focusing on media use by social movements across the globe, John Downing has collected an extraordinarily rich and eclectic range of contributions that read like an act of generous solidarity as well as of scrupulous scholarship.”

"This encyclopedia is a valuable contribution to one of the fastest-growing areas in communication studies. It is an informative, engaging, and up-to-date compendium of articles on concepts, campaigns, projects, and groups around the world, written by a balanced range of practitioners, activists, and established and emerging scholars.”

“This encyclopedia will be of use to students, scholars, and activists wanting understanding, historical precedents, and international comparison of experimental and dissident media organizations and projects.”

“The visions of and commitments to another world are everywhere out there, being pursued through a variety of social movement media. This valuable collection of international experiences proves it. It is a must-have book for activists and researchers engaged with and communicating for social change.”

“Interpreting media and communication from the point of view of social movements allows us tounderstand the constructive and transformative potential that communities have in today's global society. The Latin American treasury of community media experience is represented, and much more besides.”

"Debates may swirl about whether recent uprisings in the Middle East and Africa really owe their origins to Facebook or Twitter, but even die-hard Luddites must admit that social media had some role in facilitating the revolutions. Downing’s fascinating work provides background to this subversive phenomenon over time and across the world in articles such as 'Alternative Comics (United States),' 'Angry Buddhist Monk Phenomenon (Southeast Asia),' 'Gay Press (Canada, United Kingdom, United States),' and 'Social Democratic Media to 1914.'"

"This encyclopedia offers an internationalized glimpse of the burgeoning field of communications as practiced in social activism around the planet... Highly Recommended."