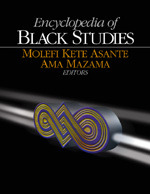 The Encyclopedia of Black Studies is the leading reference source for dynamic and innovative research on the Black experience. The concept for the encyclopedia was developed from the successful Journal of Black Studies (SAGE) and contains a full analysis of the economic, political, sociological, historical, literary, and philosophical issues related to Americans of African descent. This single-volume reference is the vanguard of the recent explosive growth in quality scholarship in the field.

More than a chronicle of black culture or black people, this encyclopedia deals with the emergence and maturity of an intellectual field over the past four decades. Beginning with the protests at San Francisco State College in 1967 that led to the first degree-granting department of Black Studies, the field's rapid growth over time necessitates an authoritative account of the discipline. More than ever scholars and students need a clear conception of what the evolutionary processes have been in the creation and maintenance of the discipline.

"The book has an explanatory preface and excellent introduction that summarizes black studies for those unfamiliar with the field.  Most of the articles provide a short bibliography of further reading for those seeking more in-depth knowledge. ...This is a required text for large public libraries and all academic libraries.  It provides a thorough understanding of and easy reference into a growing, dynamic field of study."

"Asante and the group originally centered at Temple University are credited with formalizing the discipline of Black Studies in the United States and make up most of the authors of this volume."

"Black studies has long needed this work to deflect and answer questions from critics and supporters. The editors set out to establish a baseline for understanding the field, to try in a work admittedly in progress to define the most commonly used ideas and concepts. . . . This work can be particularly helpful to scholars in tangentially related fields, helping them to know how black studies specialists define certain terms and concepts."

Asante offers students and educators an alternative perspective to the Eurocentric approach of the traditional college curriculum. Instead of interpreting social, political, historical and religious phenomena through the lenses of Western eyes, Afrocentricity seeks to identify the African place in such events. Emphasizing symbols, motifs, rituals and signs, this theory celebrates African cultural elements in all areas of life. . . . this formulation of the central ideas of an important group of scholars will be a valuable addition to many academic collections.