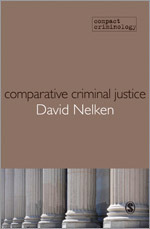 Share
Series:
Compact Criminology
Courses:
Comparative Criminal Justice
May 2010 | 136 pages | SAGE Publications Ltd
Download flyer
The increasingly important topic of comparative criminal justice is examined from an original and insightful perspective by David Nelken, one of the top scholars in the field. The author looks at why we should study crime and criminal justice in a comparative and international context, and the difficulties we encounter when we do.

Drawing on experience of teaching and research in a variety of countries, the author offers multiple illustrations of striking differences in the roles of criminal justice actors and ways of handling crime problems. The book includes in-depth discussions of such key issues as how we can learn from other jurisdictions, compare 'like with like', and balance explanation with understanding – for example, in making sense of national differences in prison rates. Careful attention is given to the question of how far globalisation challenges traditional ways of comparing units. The book also offers a number of helpful tips on methodology, showing why method and substance cannot and should not be separated when it comes to understanding other people's systems of justice.

Students and academics in criminology and criminal justice will find this book an invaluable resource.

Changing Paradigms
Why Compare?
Just Comparison
Ways of Making Sense
Explaining too Much?
The Challenge of the Global
Whose Sense?

An accessible, engaging and sophisticated introduction to the challenges of truly comparative research on crime, criminal justice and penal policy-making. This is a gem of a book, that should help to place comparative studies where they belong, at the heart of the criminological enterprise
Paul Roberts
University of Nottingham

Comparative scholarship is riven with carelessness, and this primer shows us how to do it right. Both beginning students and advanced scholars alike have much to gain by a patiently working through this book. The book is not just for criminologists; it can be read with profit by anthropologists, political scientists, sociologists, legal scholars--indeed anyone who engages in comparative analysis on any topic. In short, all of us
Malcolm M. Feeley
University of California at Berkeley ,

This succinct yet sophisticated, learned and challenging tour de force highlights the pitfalls and problems of comparative research, but the even greater perils of ignoring the diversity of cultural approaches to crime and criminal justice. A definitive analysis by the leading scholar in the field
Robert Reiner,
Professor of Criminology, Law Department, London School of Economics

...the book is not just a stimulating commentary on comparative research but also an introduction to the now impressive oeuvre of a productive and innovative thinker
Tom Daems
University of Leuven in Panopticon

The book is an extremely learned discussion of the goals, the assumptions, the implications and the methods of comparing criminal justice systems. The arguments are enriched by a number of examples drawn from the literature, with a particular attention to recent studies...Overall, the book is extremely enriching and inspiring. The author poses a number of extremely relevant questions and provides the reader with clues and suggestions for finding the most appropriate answers
European Journal on Criminal Policy and Research

David Nelken... presents a basic programme for a reflexive approach to research on criminal justice that is sensitive to the differing cultural backgrounds and framings of national-state criminal justice systems....Being able to question ones-self and becoming aware of one's own culturally shaped starting points - which at first glance appears self-evident - has not yet succeeded in gaining the status of a common practice in a comparative criminology dominated by Anglo- Saxon scholars. Probably Nelken owes his critical awareness to his many years of experience working as a British criminologist in Italy. The more readers can benefit from this, the more optimistic we may allow ourselves to be about the prospects of the discipline itself
Criminal Law Forum

David Nelken asks important questions of, and offers helpful insights into, the enterprise of comparative legal studies. ..will serve as a useful text, at both the graduate and undergraduate levels, for courses in criminology, law and society, legal studies, sociology, and comparative law
James NolanLaw and Society Review

A wonderful, masterly overview of criminal justice from a number of comparative perspective. The detail of the differences outlined and the lessons to be drawn is indeed a valuable contribution to the literature using the latest research

I read the entire manuscript in draft, and my endorsement is printed on the back-cover. My view remains that this is an excellent, pithy and accessible introduction to comparative method in criminal justice, which could contribute to a range of courses at all levels of higher education. For the purposes of my LLM course in Criminal Justice and Globalization, the book will be strongly recommended as essential reading for the first few seminars, which concentrate on theory and method (and theory of method), part of the indispensable toolkit for understanding criminal justice in its increasingly cosmopolitan context.

Statistics for Criminology and Criminal Justice

An Introduction to Criminal Justice