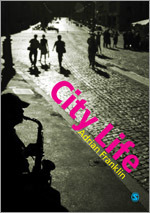 Cities are more important as cultural entities than their mere function as dormitories and industrial sites. Yet, the understanding of what makes a city 'alive' and appealing in cultural terms is still hotly contested - why are some cities so much more interesting, popular and successful than others?

In this engaging discussion in the text City Life, Adrian Franklin takes the reader on a tour of contemporary western cities exploring their historical development and arguing that it is the transformative, ritual and performative qualities of successful cities that makes a difference.

Here is a new urban culture characterized by ecological frames of reference; tracking the making of contemporary city life from traditional times, through early modern, mechanic and modernized stages of development.

Adopting dynamic narrative structures and stories to develop its critical position, this book creates a vibrant synthesis of city life from its key components:

Emphasising the importance of experience, the book represents the fluid complexity of the city as a living space, an environment and a posthumanist space of transformation. It will be of interest to all those engaging with the difficulties of urban life in sociology, human geography, tourism and cultural studies departments.

A brave foray into the interdisciplinary and a serious attempt to cover city life in all its complexity...Franklin's optimism about the city is refreshing. He revels in the growing human and cultural diversity and the "re-emergence and spread of a more tolerant, carnivalesque, culture-driven city life", and he celebrates the city's ability to offer shelter to the unexpected and the fragile. For Franklin, the city is a product of nature, with all its vicissitudes. I enjoyed his meditations on the meaning and limits of nature: "In the hands of writers London is a mighty natural phenomenon, as significant as any forest, cyclone on infection." It is in the book's final chapters, pages that are replete with Franklin's own original research on non-human life in the city, that it reveals its real strengths
Times Higher Education

City Life grabs you by the collar and draws you deep into the sensuous heartland of the western cityscape. Franklin means `life’ literally. This is not only an account of the human hopes, desires, obsessions and follies that animate bricks and mortar, but of all the diverse creatures that join in the urban adventure. Rattling along with the pace and eloquence of a good novel, you hardly realise how much social and urban theory you are taking in along the way. This is what learning should be like
Nigel Clark
Open University

A sweeping treatment of cities from Roman to contemporary times, this book highlights the powerful forces that shape cities - transforming them from traditional cities of culture and commerce, to modernist cities of industry and work, to today's post-modern cities of spectacle and consumerism - and just on the horizon - to cities of ecological integrity and human-animal coexistence for which we all long
Jennifer Wolch
University of California, Berkeley

Franklin's ambition in the book is welcome. The scope and historical sweep of analysis, and the attempt to develop arguments at some length, is a productive contrast to the myopic focus of too many analyses. By situating his analysis of the contemporary city in an extensive historical lineage, Franklin is able to draw attention to shifting fashions in urban policy and social theory, and to draw out the consequences of blind spots amidst the often overweening ambition of 'heroic' city planning... the narrative it offers will be... valuable as an introduction to students

The course linked to this text is not runninghtis academic year. However, we are re-designing our UG Housing courses for 2011-12 and it is likley that this very useful introduction to the city will be added to reading lists then ( for 2/3 rd UG students)

A highly provocative textbook which provides a no-holds-barred coverage of the realities of the quality of live, particularly in the many disadvantaged / marginalised urban communities throughout Britain. A particularly useful teaching aid, it offers a sequenced structure to the learning process in an impressively provocative approach.

Well constructed and appropriate format for this level of student

Cities in a World Economy

Introduction to Urban Development and Planning