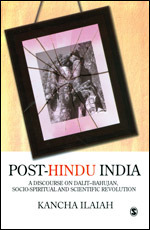 Share
Courses:
Intro to Cultural Anthropology
May 2021 | 340 pages | SAGE India
Download flyer
Kancha Ilaiah, the author of the best selling book Why I am Not a Hindu, pens a thought-provoking critique of Brahmanism and the caste system in India, while anticipating the death of Hinduism as a direct consequence of, what he says is, its anti-scientific and anti-nationalistic stand.

This work challenges Hinduism`s interpretation of history, with a virulent attack on caste politics, and also takes a refreshing look at the necessity of encouraging indigenous scientific thought for the sake of national progress. It establishes Hinduism as a `backward` religion that suppresses the latent scientific and productive potential of the Dalit–Bahujan communities. The author says this oppressive system of spiritual fascism is detrimental to both the future of religion and the nation-state. He thus criticizes the idea of spiritual justice or varnadharma, used to justify the caste system, as rooted in spiritual inequality.

On a micro-analytical level, it is based on a thorough study of the productive knowledge systems of the Dalit–Bahujan communities of Andhra Pradesh, and provides a detailed day-to-day analysis of the scientific technological processes and events at work in the life of a member of these communities. On a macro level, it shows how Hinduism fails to negotiate between faith and reason, unlike other major religions of the world.

Kancha Ilaiah critiques the intellectual imagination of the dominant communities and inspires the marginalized. In the process of doing so he crafts a work of immense socio-political interest which appeals to academics, and also to all those who are concerned about contemporary India`s polity and social fabric.
Introduction
Unpaid Teachers
Subaltern Scientists
Productive Soldiers
Subaltern Feminists
Social Doctors
Meat and Milk Economists
Unknown Engineers
Food Producers
Social Smugglers
Spiritual Fascists
Intellectual Goondas
Symptoms of Civil War and End of Hinduism
Conclusion: The Post-Hindu India

The book is a reflective account of [the author’s] journey through castes and communi­ties and highlights everyday clashes of caste cultures and conflict between "the productive ethic of Dalit-Bahujan castes and the anti-productive and anti-scien­tific ethic of Hindu Brahminism"…The contents page would catch the fancy of any reader with its catchy phrases like 'intellectual goondas" "spiritual fascists" used for Brahmins and "subaltern scientists", "meat and milk economists" for the Dalit-Bahujans…. The value of Kancha Iliah's book lies…in the richness of its observations not only on the castes of India, but also on the many people and events in the world.

Ilaiah’s book is…a detailed examination of the productive knowledge systems of the Dalit-Bahujan Communities in Andhra Pradesh…. This is an important work simply because it offers refreshing insights into an old religion that is considered to be a way of life in India.

The book is a passionate attempt to quench the thirst of the activists who hope for a social revolution. It is a commendable work that utilises wide anthropological logical resources to bring forth a variety of produc­tive tools, customs and food habits of the Dalit-Bahujan communities…. The book sincerely problematises the notion of Hinduism in a provocative way. It has the capacity to generate a debate over this very notion.

[The] chapters are based on Illaiah’s deep knowledge of the productive life of the “lowered” castes, and provide illuminating detail of the techniques of production…. Ilaiah’s attack on Brahmanism is hsarp and pointed, in some spots very convincing…. This is a challenging and useful book…. It is largely based on Ilaiah’s own participation in the life of the common people of Andhra and needs to be taken seriously at an academic level. Kancha Ilaiah has been one of the most effective intellectual activists on the anti-caste movement, tirelessly defending the cause of Dalits and other subaltern groups. This book sums up his thinking on the issue of caste and what I would prefer to call Brahmanism.

“Mr. Ilaiah’s books such as God as Political Philosopher: Buddha's Challenge to Brahminism, Why I Am Not a Hindu, Post-Hindu India: A Discourse in Dalit-Bahujan Socio-Spiritual and Scientific Revolution explore new ideas and are provocative…challenge conventional thinking, the majority Hindu view and the caste system as an element of Hindu practice.”