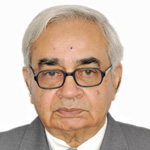 P.R. Chari is Visiting Professor, IPCS. He is a former member of the Indian Administrative Service and has served in several senior positions in the central and state governments. He sought voluntary retirement in 1992 after 32 years in the government. During the course of his official career he served two spells (1971–1975 and 1985–1988) in the Ministry of Defence. He retired from the position of Vice Chairman (Chief Executive) of the Narmada Valley Development Authority.