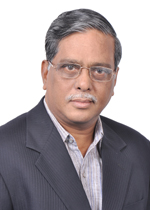 K. S. Chalam is a well-known political economist and educationist, and a former member of the Union Public Service Commission (UPSC), New Delhi. He has been the Vice Chancellor of the Dravidian University in Andhra Pradesh and had taught in the Department of Economics, Andhra University, between 1976 and 2005. He is known as the founder of the Academic Staff College Scheme in the country and was its first director.

Dr Chalam was on the Planning Board of the Madhya Pradesh government during 2002–04. He was the recipient of the UGC Young Social Scientist Award in Economics in 1984. Dr Chalam has authored Caste-Based Reservations and Human Development in India (2007, SAGE) and Economic Reforms and Social Exclusion (2011, SAGE), and edited Governance in South Asia: State of the Civil Services (2014, SAGE). He has travelled widely and has participated in and chaired sessions at various international conferences.

Dr Chalam was associated with National Human Rights Commission, New Delhi, as a special rapporteur and is now Chairman, Institute for Economic and Social Justice.