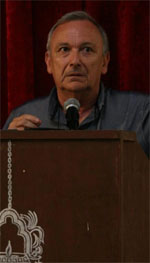 Gérard Toffin is Director of Research at National Center for Scientific Research in France. In 1985, he created the CNRS team ‘Centre for Himalayan Studies’, where he was director until 1995. He has been carrying out research in Nepal since 1970 when he first came to Nepal to work as Cultural Attaché at the French Embassy. In addition to his own research on the Newars of the Kathmandu Valley, the Paharis, the Tamangs of western Nepal, the Parbatiya culture of the districts of Gulmi and Argha Khanchi in mid-western Nepal, and the Pranami sect in India and Nepal, he has directed, edited, and taken part in various anthropological research and publishing projects. He was the chief editor of the series ‘Chemins de l’ethnologie’ published by CNRS-Editions and Foundation Maison des Sciences de l’Homme, Paris, from 1993 till 2005. In May 2013, he received the Nai Derukh International Award in Kathmandu for his contribution to the study of Nepali culture and society.