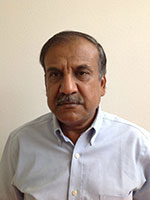 Deepak Gupta served as Secretary to the Ministry of New and Renewable Energy, Government of India, from 1 July 2008 to 30 September 2011. He was instrumental in the launching of India’s ambitious national Solar Mission. He belongs to the 1974 batch of the Indian Administrative Service (IAS). A postgraduate in History from St Stephen’s College and MPhil in International Relations from Jawaharlal Nehru University, he did a Masters in Public Administration from the Kennedy School, Harvard University, in 1992 as a Mason Fellow. He has worked in different areas in the central and state governments, including a deputation to India Trade Centre, Brussels, in the eighties. He has also served as Adviser with the World Health Organization in Delhi in 2004 for TB. He has extensively worked on rural energy issues and had designed programmes for achieving universal energy assess. He has consulted for ECOWAS (West African group of countries), World Bank and Rural Livelihoods Programme of Government of India for renewable energy and energy access after retirement. He was invited as expert in international conferences on energy access. He also authored two books related to his earlier assignments—Covering a Billion with DOTS and A Documentary Study of Participatory Irrigation Management.