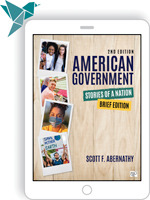 About American Government: Stories of a Nation, Brief Second Edition


Carefully condensed from the full version by Scott Abernathy, American Government, Brief Edition, gives your students all the information they need—and the stories they relate to—in a more concise, value-oriented package.

Please note that this is an instant-access product. Once you complete your purchase, you will not receive or need an access code. If you’ve previously accessed SAGE Vantage via your LMS and/or initiated a grace period, this purchase will be applied directly to your account when you log in to SAGE Vantage.

Within a few minutes of completing your order, you will receive two (2) emails as follows: a confirmation email (Your order has been received) and an email with additional instructions on how to access your product (Your SAGE Vantage order is ready). Be sure to check your spam folder and adjust filter settings if you do not receive these emails.

American Government: Stories of a Nation, tunes in to the voices of all Americans, showing how our diverse ideas shape the way we participate and behave, the laws we live by, and the challenges we face. American Government - Vantage Digital Option, Brief Second Edition delivers the trusted content from Scott Abernathy’ text on SAGE Vantage, an intuitive digital platform that features auto-graded assignments and interactive multimedia tools—including assignable video—all carefully designed to ignite student engagement and drive critical thinking. It offers easy course setup and enables students to better prepare for class. For a personalized demo, please contact your SAGE representative.

Watch this 90-second video and see how it works:

For additional information, custom options, or to request a personalized walkthrough of these resources, please contact your sales representative.

LMS cartridge included with this title for use in Blackboard, Canvas, Brightspace by Desire2Learn (D2L), and Moodle

The LMS cartridge makes it easy to import this title’s instructor resources into your learning management system (LMS). These resources include:

Don’t use an LMS platform?

You can still access all of the same online resources for this title via the password-protected Instructor Resource Site.

The open-access Student Study Site makes it easy for students to maximize their study time, anywhere, anytime. It offers flashcards that strengthen understanding of key terms and concepts, as well as learning objectives that reinforce the most important material.
Student Study Site
edge.sagepub.com/abernathybrief2e

The open-access Student Study Site makes it easy for students to maximize their study time, anywhere, anytime. It offers flashcards that strengthen understanding of key terms and concepts, as well as learning objectives that reinforce the most important material.

“With Vantage, I set up my course in under 10 minutes, which is unheard of...And it benefitted students, they did all the right things in all the right places. I love Vantage!”

“What I most like about Vantage is that my students are coming into class prepared… Student performance after implementing Vantage is incredible. It used to be out of 40 or 50 students, I had 4 or 5 A’s… and now instead of having that bulk of grades in the C’s, they’re in the A’s. We know that reading increases performance, but this is a really tangible way to see that.”

“My learners really enjoyed the SAGE Vantage experience. Many of them said it forced them to read, which aided in their comprehension…The feedback I received is that they all really enjoyed the interactive nature of the program, as well as the [number] of activities…”

Before purchasing, make sure your instructor assigned this courseware product.